Umhlanga is an affluent residential, commercial and resort town north of Durban on the coast of KwaZulu-Natal, South Africa. It is part of the eThekwini Metropolitan Municipality, created in 2000, which includes the greater Durban area. The name means “place of reeds” in the Zulu language, and the correct pronunciation of “hl” in Umhlanga is similar to the Welsh “ll”. It is bordered by Durban North to the south and Mt Edgecombe to the west.

It is well known for the Gateway Theatre of Shopping which is the largest shopping mall in the southern hemisphere. It also has the second tallest skyscraper in South Africa named Pearl Sky which will stand 183 meters upon completion in early 2018. There are two beaches: Bronze Beach and Main Beach, both of which are patrolled by lifeguards throughout the day. Umhlanga is one of the fastest-growing cities in South Africa – the population increased 57.5% from 15,387 in the 2001 census to 24,238 in the 2011 census. Recent estimates place the population at over 30,000. 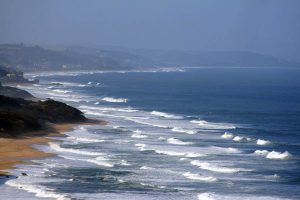